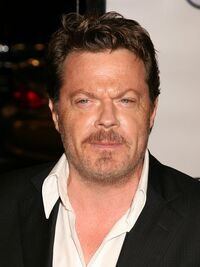 Edward John "Eddie" Izzard (born 7 February 1962) is an English stand-up comedian, actor, and writer. His comedy style takes the form of rambling, whimsical monologue and self-referential pantomime. He had a starring role in the television series The Riches as Wayne Malloy and has appeared in many motion pictures such as Ocean's Twelve, Ocean's Thirteen, Mystery Men, Shadow of the Vampire, The Cat's Meow, Across the Universe, The Chronicles of Narnia: Prince Caspian and Valkyrie. He is also the voice of Nigel in the 2006 animated film The Wild and Miles Axlerod in the 2011 Disney/Pixar animated film Cars 2.

He has cited his main comedy role model as Monty Python, and John Cleese once referred to him as the "Lost Python". In 2009, he completed 43 marathons in 51 days for Sport Relief in spite of having no prior history of long distance running. He is also known for his transvestism. He has won numerous awards including a Primetime Emmy Award for Individual Performance in a Variety or Music Program for his comedy special Dress to Kill, in 2000. Izzard's web site won the Yahoo People's Choice Award and earned the Webby Award. [1]

In Mockingbird Lane, he plays the role of Grandpa (Sam Dracula).

Retrieved from "https://munster.fandom.com/wiki/Eddie_Izzard?oldid=4576"
Community content is available under CC-BY-SA unless otherwise noted.